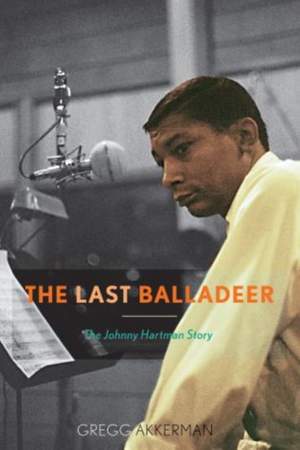 Editors' Pick! Gregg Akkerman, director of jazz studies at University of South Carolina Upstate in Spartanburg, has made a crucial contribution to keeping Hartman's memory alive with this... — Downbeat More…

Just after recording with John Coltrane in 1963, baritone singer Johnny Hartman (1923-1983) told a family member that "something special" occurred in the studio that day. He was right - the album, containing definitive readings of "Lush Life" and "My One and Only Love," resides firmly in the realm of iconic; forever enveloping listeners in the sounds of romance. In The Last Balladeer, author Gregg Akkerman skillfully reveals not only the intimate details of that album but the life-long achievements and occasional missteps of Hartman as an African-American artist dedicated to his craft. This book carefully follows the journey of the Grammy-nominated vocalist from his big band origins with Earl Hines and Dizzy Gillespie to featured soloist in prestigious supper clubs throughout the world. Through exclusive interviews with Hartman's family and fellow musicians (including Tony Bennett, Billy Taylor, Kurt Elling, Jon Hendricks, and others), accounts from friends and associates, newly discovered recordings and studio outtakes, and in-depth research on his career and personal life, Akkerman expertly recollects the Hartman character as a gentleman, romantic, family man, and constant contributor to the jazz scene. From his international concerts in Japan, Australia, and England to his steady presence as an American nightclub singer that spanned five decades, Hartman personifies the "last balladeer" of his kind, singing with a sentiment that captured the attention of Clint Eastwood, who brought Hartman's songs to the masses in the film The Bridges of Madison County. In the first full-length biography and discography to chronicle the rhapsodic life and music of Johnny Hartman, the author completes a previously missing dimension of vocal-jazz history by documenting Hartman as the balladeer who crooned his way into so many hearts. Backed by impeccable research but conveyed in a conversational style, this book will interest not only musicians and scholars but any fan of the Great American Songbook and the singers who brought it to life.

Editors' Pick! Gregg Akkerman, director of jazz studies at University of South Carolina Upstate in Spartanburg, has made a crucial contribution to keeping Hartman's memory alive with this biography. Akkerman draws on extensive interviews, archives and his own sharp musical analysis to trace Hartman's Chicago origins, his time serving in both Earl Hines' and Dizzy Gillespie's big bands and the creation of the classic 1963 album John Coltrane And Johnny Hartman. The author also looks at the longstanding comparisons between Hartman and Billy Eckstine and shows why their supposed rivalry was a canard. ...Now students and fans of jazz vocals can hope that this book will lead to a proper reissue of Hartman's triumphant 1980 Bee Hive album, Once In Every Life, which contained all four of the Hartman songs that were included on the 1995 CD soundtrack to Madison County