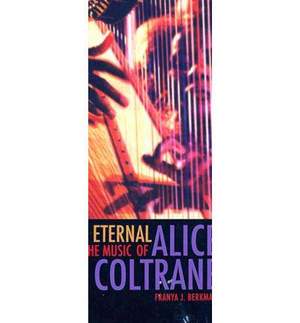 Alice Coltrane was a composer, improviser, guru, and widow of John Coltrane. Over the course of her musical life, she synthesized a wide range of musical genres including gospel, rhythm-and-blues, bebop, free jazz, Indian devotional song, and Western art music. Her childhood experiences playing for African-American congregations in Detroit, the ecstatic and avant-garde improvisations she performed on the bandstand with her husband John Coltrane, and her religious pilgrimages to India reveal themselves on more than twenty albums of original music for the Impulse and Warner Brothers labels. In the late 1970s Alice Coltrane became a swami, directing an alternative spiritual community in Southern California. Exploring her transformation from Alice McLeod, Detroit church pianist and bebopper, to guru Swami Turiya Sangitananda, Monument Eternal illuminates her music and, in turn, reveals the exceptional fluidity of American religious practices in the second half of the twentieth century. Most of all, this book celebrates the hybrid music of an exceptional, boundary-crossing African-American artist.

a compelling portrait of an extraordinary womana fascinating and important study