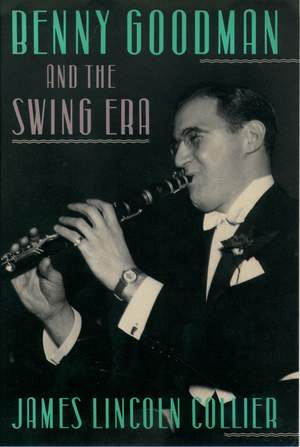 Benny Goodman and the Swing Era

Even with the benefit of all the diligent research that has made this book so gripping, Collier is unable to explain why Goodman could be so uniquely nasty ... a disturbing and revealing account... — Jazz FM More…

Born of poor Jewish immigrant parents in Chicago in 1909, Beny Goodman joined the local synagogue band at the age of ten with two of his brothers. As he was the smallest of the three he was given a clarinet. Within a decade he was a musical legend, constantly in demand for radio shows and guest appearances with America's leading jazz orchestras. In 1934 he formed his own band, and by the mid-1930s, Benny Goodman was hailed as the undisputed `King of Swing'. James Lincoln Collier brilliantly recreates the colourful popular music world of the 1920s and 1930s, when the music industry was just expanding, radio was the great source of musical entertainment, and swing bands were first finding national audiences. He also offers perceptive insights into the character and music of a man whose magic transformed the Depression years into the Swing Era.

Even with the benefit of all the diligent research that has made this book so gripping, Collier is unable to explain why Goodman could be so uniquely nasty ... a disturbing and revealing account of one of the most paradoxical lives in jazz

he has marshalled the available data very diligently ... a commendable work on the Jewish boy from the ghetto who made good

his book leaves us with a sharply drawn, far from flattering portrait of the ambitious, totally self-centred clarinettist and band leader ... But Collier paints an enthralling picture of the whole American popular music industry through to the fifties ... Collier is an extremely able social historian ... His ensembles blow as hard as his solos making this book an indispensable companion to the records