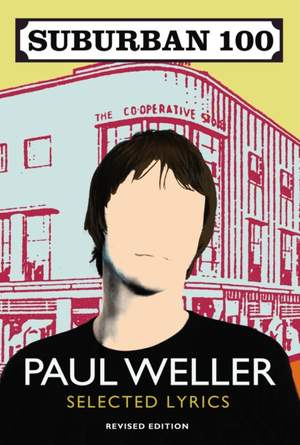 REVISED, UPDATED AND WITH A NEW FOREWORD BY PAUL ABBOTT

This edition of Suburban 100 includes new lyrics from the critically acclaimed albums, 22 Dreams and Wake Up the Nation, which has been nominated for the Mercury Music Award.

Paul Weller first burst onto the national music scene with The Jam in 1977 and was quickly marked apart from his contemporaries as a brilliant lyricist. In a writing career that has now spanned three decades, his songs have been acclaimed, imitated and loved by many.

Suburban 100 - the first selection of Paul Weller's lyrics - draws on songs written for The Jam, The Style Council and solo releases that, together, tell stories of life and love, rage and romance. The youthful frustrations of small-town life that fuelled Weller's early writing is palpable, as is the angry but poignant response to Thatcher's Britain. His lyrics, rooted in English suburban culture, explore the hopes, dreams and crashing disappointments of ordinary people. They also revel in the mystical beauty of the English country landscape and repeatedly revisit dreamlike childhood summers.

For the first time Paul Weller shares his reflections on his lyrics, offering candid insights to his writing process and the inspiration behind some of pop music's best loved songs. Suburban 100 reveals aspects of a famously private man.