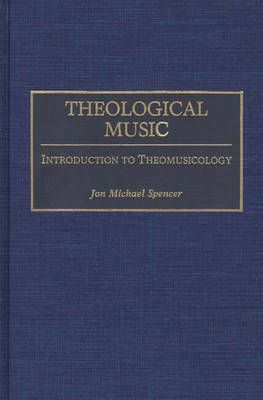 Theomusicology is musicology as a theologically informed discipline. Borrowing thought and method from anthropology, sociology, psychology, and philosophy, it has as its subject the myriad cultural worlds of ethical, religious, and mythological belief. Theomusicological research into cultural/intercultural reflections on the ethical, the religious, and the mythological involves the study of music in the domain or communities of the sacred, the secular, and the profane. By examining the depths of sacrality, secularity, and profanity in the music of civilization's many cultures, the theomusicologist can increasingly discern how particular peoples perceive the universal mysteries that circumscribe their mortal existence, and how the ethics, theologies, and mythologies to which they subscribe shape their worlds.

To accomplish his goal, Spencer divides his book into two parts. Part One, The Domain of Theomusicology, functions as a methodological exposition to Part Two. It defines the meaning of and suggested method for theomusicology and delineates the theomusicologist's best and broadest possible perspective on the world. Part Two, The Discourses of Theomusicology, illustrates how theomusicology can, and at its best does, involve dialogue with different disciplines as well as a gamut of historical epochs and movements. Each chapter is divided into sections based on the particular text theomusicology has read and interacted with. Spencer's work establishes theomusicology as a scholarly discipline and a valid research approach to studying world religious, mythological, and ethical beliefs via music. It is essential reading for historical musicologists, ethnomusicologists, and scholars of sacred music.