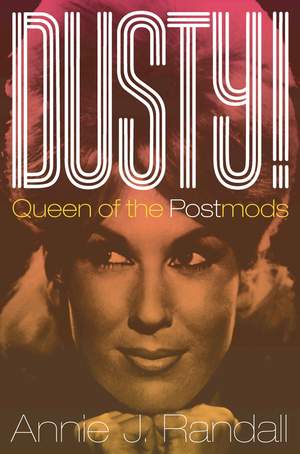 Dusty!: Queen of the Postmods

Dubbed the "White Queen of Soul," singer Dusty Springfield became the first British soloist to break into the U.S. Top Ten music charts with her 1964 hit "I Only Want To Be With You" - a pop classic followed by many others, including "You Don't Have to Say You Love Me" and "Son of a Preacher Man." Today she is usually placed within the history of the Beatles-led "British Invasion" or seen as a devoted acolyte of Motown. In this penetrating look at her music and career, Annie J. Randall shows how Springfield's contributions transcend the narrow limits of those descriptions and how this middle-class former convent girl became perhaps the unlikeliest of artists to achieve soul credibility on both sides of the Atlantic. Randall reevaluates Springfield's place in sixties popular music through close investigation of her performances as well as interviews with her friends, peers, professional associates, and longtime fans. As the author notes, the singer's unique look-blonde beehive wigs and heavy black mascara-became iconic of the mid-sixties postmodern moment in which identity scrambling and camp pastiche were the norms in swinging London's pop culture. Randall places Springfield within this rich cultural context, focusing on the years from 1964 to 1968, when she recorded her biggest international hits and was a constant presence on British television. The book pays special attention to Springfield's close collaboration and friendship with American gospel singer Madeline Bell, the distinctive way Springfield combined US soul and European melodrama to achieve her own musical style and stage presence, and how her camp sensibility figured as a key element of her artistry.