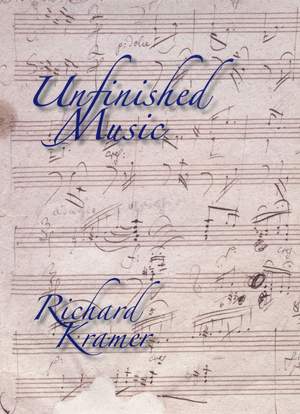 Unfinished Music draws its inspiration from the riddling aphorism by Walter Benjamin that serves as its epigraph: "the work is the death mask of its conception." The work in its finished, perfected state conceals the enlivening process engaged in its creation. An opening chapter of this book examines some explosive ideas from the mind of J. G. Hamann, eccentric figure of the anti-rationalist Enlightenment, on the place of language at the seat of thought. These ideas are pursued as an entry into the no less radical mind of Carl Philipp Emanuel Bach, whose bold idiosyncrasies, like Hamann's, disrupted the discourse of Enlightenment aesthetics. Bach is a central player here, his late music the subject of fresh inquiry. In several chapters on the late music of Beethoven, Bach reappears, now something of a spiritual alter ego in the search for a new voice. The improvisatory as a mode of thought figures prominently here, and then inspires a new hearing of the envisioning of Chaos at the outset of Haydn's Creation, aligned with Herder's efforts to come to an understanding of logos at the origin of thought. The improvisatory is at the heart of a chapter on Beethoven's brazen cadenzas for the Concerto in D minor by Mozart, another ghost in Beethoven's machine. Music seductively unfinished is the topic of other chapters: on some unstudied late sketches, finally rejected, for a famous quartet movement by Beethoven; on the enigmas set loose in several remarkable Mozart fragments; and on the romanticizing of fragment and its bearing on two important sonatas that Schubert left incomplete. In a final coming to terms with the imponderables of musical intuition, the author returns to Benjamin's epigraph, drawing together his foundational essay on Goethe's Elective Affinities with Thomas Mann's Death in Venice, and with a draft for a famous passage in the andantino of Schubert's Sonata in A (1828). Unfinished Music explores with subtle insight the uneasy relationship between the finished work and the elusive, provocative traces of the profound labors buried in its past. The book will have broad appeal to the community of music scholars, theorists and performers, and to all those for whom music is integral to the history of ideas.