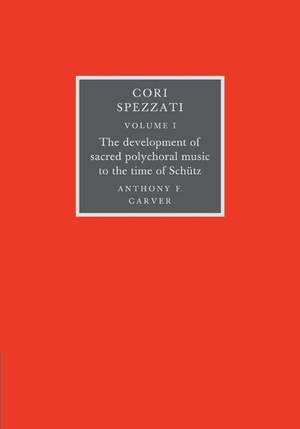 Cori Spezzati deals with polychoral church music from its beginnings in the first few decades of the sixteenth century to its climax in the work of Giovanni Gabrieli and Heinrich Schutz. In polychoral music the singers, sometimes with instrumentalists also, were split into two (or more) groups that often engaged in lively dialogue and joined in majestic tutti climaxes. The book draws on contemporary descriptions of the idiom, especially from the writings of Vicentino and Zarlino, but concentrates in the main on musical analysis, showing how antiphonal chanting (such as that of the psalms), dialogue and canon influenced the phenomenon. Polychoral music has often been considered synonymous not only with Venetian music, but with impressive pomp. Anthony Carver's study shows that it was cultivated by many composers outside Venice - in Rome, all over northern Italy, in Catholic and Protestant areas of Germany, in Spain and the New World - and that it was as capable of quiet devotion or mannerist expressionism as of outgoing pomp. Perhaps most important, music by several major composers about which there is still surprisingly little in the literature is treated in depth: the Gabrielis, Lasso, Palestrina, Victoria, and several German masters. The book is illustrated with many musical examples. A companion volume offers an anthology of seventeen complete pieces, most of which are analysed in the text of Volume I.