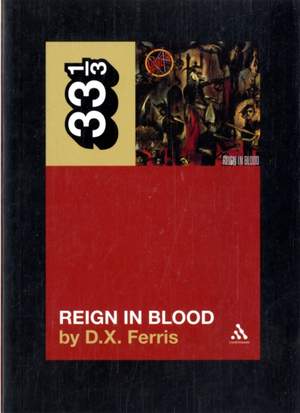 D.X. Ferris explores the creation of the most universally respected metal album.Slayer's controversial "Reign in Blood" remains the gold standard for extreme heavy metal: a seamless procession of ten blindingly fast songs in just twenty-eight minutes, delivered in furious bursts of instrumental precision, with lyrics so striking that Tori Amos was moved to record a cover. Reign in Blood saw the emerging underground standouts from Huntington Beach team with Rick Rubin - 2007's Grammy-Award winner for producer of the year, then known strictly for creating hip-hop albums with groups such as Run-DMC and the Beastie Boys - to permanently fuse classic rock's technical proficiency, hardcore punk's speed and metal's brute power. Working in a much-maligned genre, guitarists Jeff Hanneman and Kerry King emerged as the Lennon and McCartney of speed metal, penning a collection of apocalyptic scenes comparable to the dark work of novelists like Cormac McCarthy and Herman Melville.The album came together though the efforts of a team that would go on to be some of the biggest names in the current music business. Issued on America's premier rap label at the pinnacle of the thrash movement, Reign in Blood sparked a new genre called death metal and continues to serve as a touchstone for metal musicians. The disc marked Slayer's coronation as the kings of thrash and their ongoing twenty-five year streak of vitality places them in the small fraternity of rock's greatest groups. Through interviews with the entire band, Rubin, engineer Andy Wallace, and a who's who of headbangers from three decades, D.X. Ferris explores the creation of the most universally respected metal album."33 1/3" is a series of short books about a wide variety of albums, by artists ranging from James Brown to the Beastie Boys. Launched in September 2003, the series now contains over 50 titles and is acclaimed and loved by fans, musicians and scholars alike.