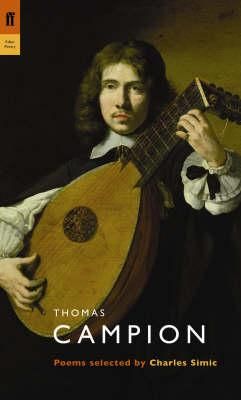 In this series, a contemporary poet selects and introduces a poet of the past. By their choice of poems and by the personal and critical reactions they express in their prefaces, the editors offer insights into their own work as well as providing an accessible and passionate introduction to the most important poets in our literature. Thomas Campion (1567-1620) was born in London and educated at Cambridge. He studied law at Gray's Inn, and was both a poet and composer - a contemporary not only of Shakespeare, Drayton, Marlowe and Jonson, but also of Byrd, Morley, Gibbons and Dowland. Campion wrote over one hundred lute songs, published between 1601 and 1617 in four Books of Ayres, as well as a treatise on The Art of English Poesie, and a number of masques. His work was not rediscovered until the nineteenth century; since then, whoever dreams of a poem where language begins to resemble music thinks of Campion.