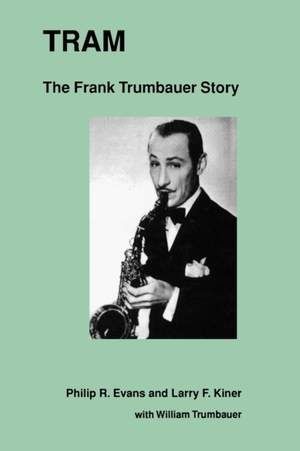 Tram left us all too soon. How fortunate it is that such a long-awaited book, after all these years, will aid to preserve the memory of this great jazz artist — IAJRC Journal More…

During those years, all sax men copied Tram. They knew all of his choruses from his recordings and when he appeared in person, they'd flock to hear him play. -From the Foreword by "Rosy" McHargue Frank was an American Music Legend. His life was brief, 1901-1956, but he left us a legacy of his phonograph records. When Jimmy Dorsey joined the Ray Miller Orchestra, he was asked to play like Tram. Lester Young carried Tram's recordings in his suitcase. "Toots" Mondello said that a sax man wasn't judged complete until he mastered Trumbauer's solo on "Singin' The Blues." Frank's daughter, Lynne, made available his private papers, diaries, letters, and interviews, resulting in a complete accounting of his life. Frank's remarks were culled from these sources and properly placed to give the readers a continual sense of Tram commenting as they turn the pages. Tram's complete story is presented: The divided love between music and aviation; his years with Paul Whiteman; his friends, Zentner, Bing, Hoagy, and Bix.

Tram left us all too soon. How fortunate it is that such a long-awaited book, after all these years, will aid to preserve the memory of this great jazz artist

a most welcome addition to the family of biographies of jazz musicians of the 1920s and 1930s. It is a very engaging way to present Tram's story, and the book reads well; so well, that it is hard to put it down...not only an excellent biography, but a top-notch reference work as well

and it will delight anyone interested in Bix, Paul Whiteman, the 1920s, the early days of white jazz, or the musician himself, Frank Trumbauer

If your interest lies in learning previously unknown facts about the personal life and recordings of one of the most influential sax men of all time, then this book is for you. A masterful job on a tough subject