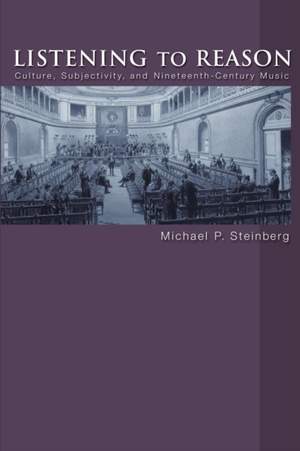 This pathbreaking work reveals the pivotal role of music--musical works and musical culture--in debates about society, self, and culture that forged European modernity through the "long nineteenth century." Michael Steinberg argues that, from the late 1700s to the early 1900s, music not only reflected but also embodied modern subjectivity as it increasingly engaged and criticized old regimes of power, belief, and representation. His purview ranges from Mozart to Mahler, and from the sacred to the secular, including opera as well as symphonic and solo instrumental music. Defining subjectivity as the experience rather than the position of the "I," Steinberg argues that music's embodiment of subjectivity involved its apparent capacity to "listen" to itself, its past, its desires. Nineteenth-century music, in particular music from a north German Protestant sphere, inspired introspection in a way that the music and art of previous periods, notably the Catholic baroque with its emphasis on the visual, did not. The book analyzes musical subjectivity initially from Mozart through Mendelssohn, then seeks it, in its central chapter, in those aspects of Wagner that contradict his own ideological imperialism, before finally uncovering its survival in the post-Wagnerian recovery from musical and other ideologies. Engagingly written yet theoretically sophisticated, Listening to Reason represents a startlingly original corrective to cultural history's long-standing inhibition to engage with music while presenting a powerful alternative vision of the modern.