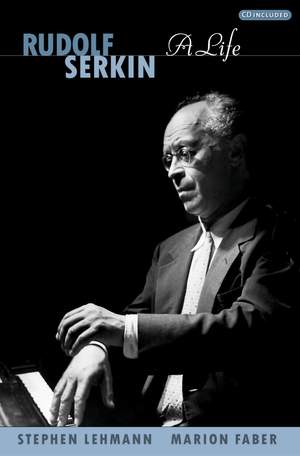 Rudolf Serkin habitually used his modesty as a protective shield against journalists ... in this economical, wide-ranging, well-ordered biography he comes across as both a richly deserving subject... — BBC Music Magazine More…

Like Heifitz and Horowitz, Rudolf Serkin was a virtuosic solo performer who made European classical music an important part of American middle class culture in the mid-20th century. This book, the first biography of this influential pianist, chronicles Serkin's life and career and assesses his impact on classical music in America. Beginning with Serkin's upbringing and early adulthood in Europe, the book reveals the story of a religious Czech Jew's assimilation into Austro-German society and particularly into the profoundly German household of Adolf Busch. When Serkin immigrated to the United States, he imported with him a particularly German perspective on classical music performance. Best known for his recordings of Beethoven sonatas, Serkin also performed Brahms, Mozart, Bach, and other composers' works. Later in his career, he became an active teacher, embarking on a long association with the Curtis Institute in Philadelphia. As artistic director of the Marlboro Music School and Festival in Vermont, Serkin played a key role in institutionalizing a redefinition of musical values in America. Extensive interviews with Serkin's friends and students are an important fixture of the book. The book concludes with a discography by Paul Farber that documents an essential part of Serkin's achievement.

Rudolf Serkin habitually used his modesty as a protective shield against journalists ... in this economical, wide-ranging, well-ordered biography he comes across as both a richly deserving subject of any such enterprise and a figure of considerably greater complexity than he liked to reveal in public