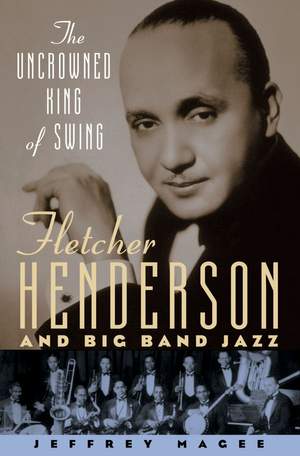 If Benny Goodman was the "King of Swing," then Fletcher Henderson was the power behind the throne. Not only did Henderson arrange the music that powered Goodman's meteoric rise, he also helped launch the careers of Louis Armstrong and Coleman Hawkins, among others. Now Jeffrey Magee offers a fascinating account of this pivotal bandleader, throwing new light on the emergence of modern jazz and the world that created it. Drawing on an unprecedented combination of sources, including sound recordings, obscure stock arrangements, and hundreds of scores that have been available only since Goodman's death, Magee illuminates Henderson's musical output, from his early work as a New York bandleader, to his pivotal role in building the Kingdom of Swing. He shows how Henderson, standing at the forefront of the New York jazz scene during the 1920s and '30s, assembled the era's best musicians, simultaneously preserving jazz's distinctiveness and performing popular dance music that reached a wide audience. Magee reveals how, in Henderson's largely segregated musical world, black and white musicians worked together to establish jazz, how Henderson's style rose out of collaborations with many key players, how these players deftly combined improvised and written music, and how their work negotiated artistic and commercial impulses. And we see how, in the depths of the Depression, record producer John Hammond brought together Henderson and Goodman, a fortuitous collaboration that changed the face of American music. Whether placing Henderson's life in the context of the Great Migration or the Harlem Renaissance or describing how the savvy use of network radio made the Henderson-Goodman style a national standard, Jeffrey Magee brings to life a monumental musician who helped to shape an era.