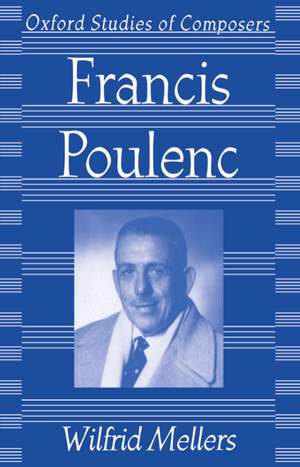 Once considered as little more than the froth in the wake of the First World War, a witty boy-hedonist who, in the giddy Twenties, tweaked the noses of moribund establishmentarians, Poulenc has in fact proved unexpectedly durable - more so than any of his colleagues among Les Six, including those who developed more grandiose ambitions. Here is a survey of Poulenc's music, based on careful selection of his works, and written by an authoritative guide. Having placed Poulenc in the context of French life and society after the First World War and considered him in relation to his masters and mentors, especially Satie and Chabrier, Mellers turns to Poulenc's Diaghilev ballet, Les Biches, to important sequels to it, such as Concert champetre and Aubade, and to works of transition, such as the Concerto for two pianos and orchestra. The next section discusses the `social' music of Poulenc's middle years - especially the music for piano (for Poulenc a domestic instrument), written during the Thirties, and the centrality of song in his work; some account is offered of his relationship with his main poets, Guillaume Apollinaire, Paul Eluard, and Louise de Vilmorin. Mellers mext considers the impact on Poulenc of the Second World War, especially as manifest in the great choral work Quatre Motets de Penitence and the Organ Concerto. Separate chapters deal with the three main operatic pieces and Poulenc's relationship to Bernanos and Jean Cocteau; with the late devotional works, especially the Stabat Mater, the Gloriam and the Sept Repons des Tenebres; and with the chamber works of the last few years. The chapters are illustrated througout with music examples. Adopting a broadly chronological approach, Mellers traces Poulenc's development as a composer from enfant terrible to a mature composer both for secular Society and for the liturgy of the Catholic Church; in so doing he points to the reasons for the durability and pertinacity of his appeal. Mellers further assesses Poulenc's place in the French tradition, and, in a Postlude, pays tribute to the warm regard with which Poulenc was held by so many of his fellow musicians.