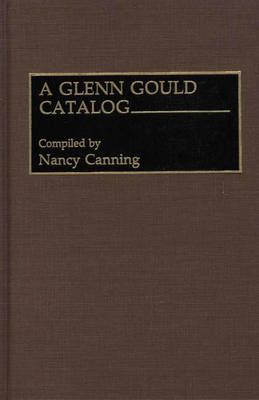 This is a fine piece of research, recommended for conservatories and for all colleges that offer music degrees — Choice

Despite his premature death in 1982, Canadian pianist Glenn Gould remains extraordinarily influential in contemporary music. Known especially for his interpretations of Bach and a wide range of classical, romantic, and twentieth-century composers, Gould was also an accomplished composer and conductor, as well as provocative lecturer, writer, and critic. His music remains vital on recordings, and his published writings, and taped radio documentaries and television specials are available for archival research. Canning's A Glenn Gould Catalog provides a detailed roadmap to his career as performer, conductor, composer, host, guest, narrator, writer, and producer.

The volume's main catalog, organized by composer, documents Gould's commercial discography and Canadian public radio and television recordings with detailed information, including: recording dates and location, release or broadcast date, commercial catalog and internal matrix numbers, album or broadcast name, producer(s), and various notes. The Musical Repertoire and Recording Chronicle sections provide access to the recordings by composition and opus number and by recording data respectively. The Canadian Broadcasting Corporation Archives section lists Gould's radio and television programs by date, and other chronologies are included for his Sony Catalog, Other Commercial Releases, and Unreleased Recordings. A bibliography of Gould's published writings and a bibliographical note on writings about Gould complete the volume. Carefully documented, cross-referenced, and indexed, the Glenn Gould Catalog constitutes an autobiographical outline of Gould's career through his works. It is an important resource for research and a valuable adjunct to published biographies and critical studies. The compiler's lively introductory material is augmented by photographs and interview commentary from Gould's colleagues.

This is a fine piece of research, recommended for conservatories and for all colleges that offer music degrees