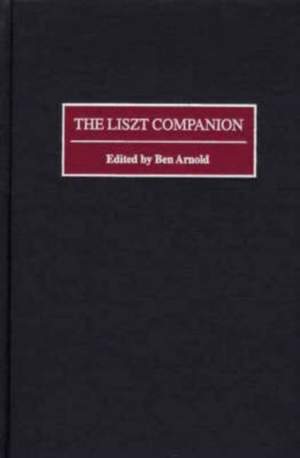 Franz Liszt is most well-known for his compositions for piano and orchestra, but his influence is also strong in chamber music, choral music, and orchestral transcriptions. This new collection of essays presents a scholarly overview of all of the composer's work, providing the most comprehensive and current treatment of both his oeuvre and the immense amount of secondary literature written about it. Highly regarded critics and scholars write for both a general and academic audience, covering all of Liszt's major compositions as well as the neglected gems found among his choral and chamber works.

Following an outline of the subject's life, The Liszt Companion goes on to detail Liszt's critical reception in the German press, his writings and letters, his piano and orchestral works, his neglected secular choral works, and his major organ compositions. Also explored here are his little-known chamber pieces and his songs. An exhaustive bibliography and index of works conclude the volume. This work will both elucidate aspects of Liszt's most famous work and revive interest in those pieces that deserve and require greater attention.