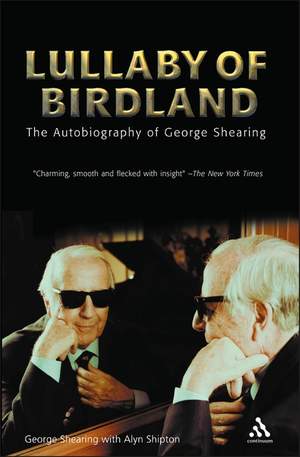 Lullaby of Birdland: The Autobiography of George Shearing

Titled after Shearing's most famous composition, this book is written with a punning sense of humor - a style that marks both Shearing's private life and stage performances. He fills his books... — Choice More…

Pianist George Shearing is that rare thing, a European jazz musician who became a household name in the US, as a result of the 'Shearing sound' - the recordings of his historic late 1940s quintet. Together with his unique 'locked hands' approach to playing the piano, Shearing's quintet with guitar and vibraphone in close harmony to his own playing revolutionised small group jazz, and ensured that after seven years as Melody Maker's top British pianist, he achieved even greater success in America. His compositions have been recorded by everyone from Sarah Vaughan to Miles Davis, and his best known pieces include Lullaby of Birdland, She and Conception. His story is all the more remarkable because Shearing was born blind. As a teenager he joined Claude Bampton's orchestra, and he recounts hilarious anecdotes about the trials and tribulations of this all blind group. By the start of the war years, Shearing was established as one of Britain's most popular and impressive jazz pianists - broadcasting regularly and playing and recording with Stephane Grappelli. In 1947 he emigrated to the US and started his landmark series of records with his quintet as well as performing classical pieces with several leading symphony orchestras. His candid reminiscences include a behind the scenes experience of New York's 52nd Street in its heyday, as well as memories of a vast roll-call of professional colleagues that includes all the great names in jazz.

Titled after Shearing's most famous composition, this book is written with a punning sense of humor - a style that marks both Shearing's private life and stage performances. He fills his books with tales of making music with some of the most important jazz artists of the 20th century. Shearing's grace, charm, and humor are everywhere in this book, including the dust jacket photograph, which shows him looking into a mirror adjusting his tie. Highly recommended