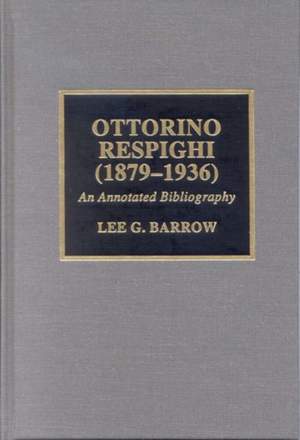 Ottorino Respighi stands alongside Giacomo Puccini and Antonio Vivaldi as one of the best known and most performed Italian composers. Yet, compared to that of other composers of Respighi's stature, relatively little has been written about the man and his music. This work provides documentation and annotation of all of this great composer's articles, books, theses, and dissertations with references to Respighi and his music published during the last century throughout the world. Barrow provides a comprehensive general index as well as both a discography and an index of Respighi's compositions. Despite the popularity of his two most famous works Fontane di Roma (Fountains of Rome) and Pini di Roma (Pines of Rome) Respighi has been largely ignored and even criticized by scholars and critics. Only recently has there been an increase in attention from these writers in the music of this important composer, but mostly in his native Italy. This reference volume offers authoritative direction for librarians, students, musicologists, and conductors seeking details of the composer's life and work.