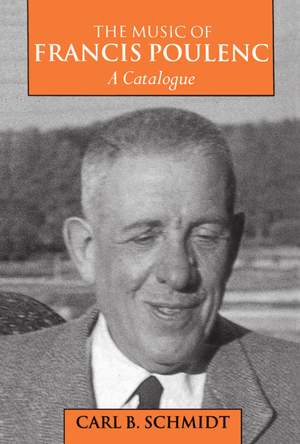 The name of Francis Poulenc (1899-1963) was first brought to prominence in the 1920s as a member of Les Six, a group of young French composers encouraged by Satie and Cocteau. His subsequent fame spread well beyond France, and he is coming to be regarded as one of this century's most significant composers. His compositions are heard constantly in concert halls the world over, and numerous recordings, including complete sets of songs and piano music, have been released. Books, articles and more than a dozen doctoral dissertations have discussed his music. Carl Schmidt's catalogue of Poulenc's works represents the first comprehensive attempt to list an oeuvre which numbers approximately 185 compositions written from his teenage years until his death at the age of 63. The Catalogue indentifies a number of unpublished works, and adds a small group of compositions to his musical canon for the first time. Each work, whether complete or unfinished, published or unpublished, is described fully. Catalogue entries list and describe all known printed editions (including reprints) and manuscript copies of each work. In addition, they provide detailed compositional histories based on numerous letters, documents, and press accounts, many of which have not been published previously. Russian interest in Poulenc's music, manifested in press runs exceeding one million copies, is also revealed for the first time.