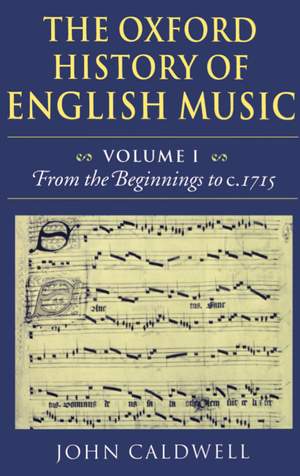 The Oxford History of English Music: Volume 1: From the Beginnings to c.1715

We wait with the liveliest expectancy for the second instalment of this munificent, music-loving book — The Times More…

The Oxford History of English Music will survey in two volumes the whole field of music by English composers. This first volume begins with the settlement of the North German peoples and the cultivation of church music following the mission of St Augustine in 597. Relations between France and England form the background to the account of medieval music after the Norman Conquest, and the growth of a distinct national style is then traced from the early fifteenth century, through the early Tudor period and that of the Reformation, to the outstanding achievements of Elizabethan and Stuart England. The arrival of Handel is related to the period of experimentation following Purcell's death in 1695 and the volume concludes with his decision to remain and the end of the Stuart monarchy. The contribution of such outstanding figures as Dunstable, Taverner, Byrd, and Purcell is placed in the context of the music of their contemporaries, while the social, religious, and historical background to their music is given full attention. There are over two hundred musical examples and sixteen pages of plates.

We wait with the liveliest expectancy for the second instalment of this munificent, music-loving book

the signal virtue of this book, over and above its scholarship, is that it never forgets that music is made by human beings for human beings