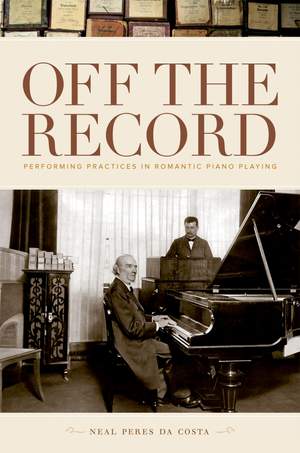 Off the Record: Performing Practices in Romantic Piano Playing

[Peres da Costa] has read everything, listened to everything and marshalled it into a well-written and logically organised narrative. His range of references is highly impressive. He has provided... — Gramophone Magazine More…

Off the Record is a revealing exploration of piano performing practices of the high Romantic era. Author and well-known pianist Neal Peres Da Costa bases his investigation on a range of early sound recordings (acoustic, piano roll and electric) that capture a generation of highly-esteemed pianists trained as far back as the mid-nineteenth-century. Placing general practices of late nineteenth-century piano performance alongside evidence of the stylistic idiosyncrasies of legendary pianists such as Carl Reinecke (1824-1910), Theodor Leschetizky (1830-1915), Camille Saint-Saens (1838-1921) and Johannes Brahms (1833-1897), he examines prevalent techniques of the time-dislocation, unnotated arpeggiation, rhythmic alteration, tempo fluctuation-and unfolds the background and lineage of significant performer/pedagogues. Throughout, Peres Da Costa demonstrates that these early recordings do not simply capture the idiosyncrasies of aging musicians as has been commonly asserted, but in fact represent a range of established expressive practices of a lost age. An extensive collection of these rare and never-before-heard professional recordings of the Romantic age masters are available on a companion web site, and in addition, Peres Da Costa, himself a renowned period keyboardist, illustrates points made throughout the book with his own playing. Of essential value to student and professional pianists, historical musicologists of 19th and early 20th century performance practice, and also to the general music aficionado audience, Off the Record is an indispensable resource for scholarly research, performance inspiration, and listening enjoyment.

[Peres da Costa] has read everything, listened to everything and marshalled it into a well-written and logically organised narrative. His range of references is highly impressive. He has provided pianophiles with some thought-provoking questions