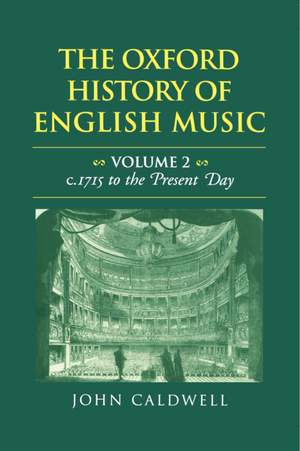 The Oxford History of English Music: Volume 2: c.1715 to the Present Day

The Oxford History of English Music, Volume 2 takes the story of English Music from c.1715 to the present day. Apart from discussing the music of the principal composers, it focuses to a certain extent on the work of lesser musicians, and includes developments in light and popular music as well as in serious genres. After seven chapters in which the main events are considered chronologically, a further chapter deals specifically with folk music and popular music of all periods, and a final chapter covers social issues not otherwise handled in detail. There are over a hundred musical examples, illustrating all chapters except the last, and all based on original sources. Volumes 1 and 2 together offer a major survey of English musical history by a single author. British music outside England is not considered except where it is of direct relevance to the history of music in England; it thus differs in emphasis from most other works of the kind since Ernest Walker's History of Music in England, last revised in 1952 by Sir Jack Westrup (OUP).