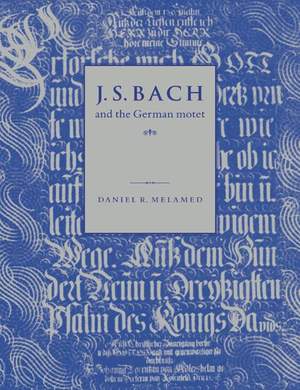 The motets of J. S. Bach are probably the most sophisticated works ever composed in the genre. Nevertheless, Daniel Melamed maintains, the view that they constitute a body of work quite separate from the German motet tradition is mistaken. He starts by considering the eighteenth-century understanding of the term itself and finds that Bach's own use does indeed agree with his contemporaries and that his motets are rooted in the conventions of the time, particularly in matters of musical construction, performing forces, and type of text. A fresh look at the repertory shows that Bach composed motets all through his career and an appreciation of the contemporary conception of the motet sheds light on questions of how and why Bach himself used the form. Professor Melamed also finds plenty of evidence that motets and motet style played an important role in Bach's exploration of the musical past.