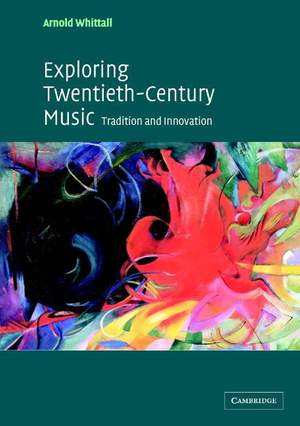 One might ask if this book, closely following Whitalls Musical Composition in the Twentieth Century (1999), is sufficiently different to merit consideration. The answer is an emphatic yes....... — Choice More…

In this wide-ranging book, Arnold Whittall considers a group of important composers of the twentieth century, including Debussy, Webern, Schoenberg, Stravinsky, Bartók, Janácek, Britten, Carter, Birtwistle, Andriessen and Adams. He moves skilfully between the cultural and the technical, the general and the particular, to explore the various contexts and critical perspectives which illuminate certain works by these composers. Considering the extent to which place and nationality contribute to the definition of musical character, he investigates the relevance of such images as mirroring and symmetry, the function of genre and the way types of identity may be suggested by such labels as classical, modernist, secular, sacred radical, traditional. These categories are considered as flexible and interactive and they generate a wide-ranging series of narratives delineating some of the most fundamental forces which affected composers and their works within the complex and challenging world of the twentieth century.

One might ask if this book, closely following Whitalls Musical Composition in the Twentieth Century (1999), is sufficiently different to merit consideration. The answer is an emphatic yes.... Highly recommended