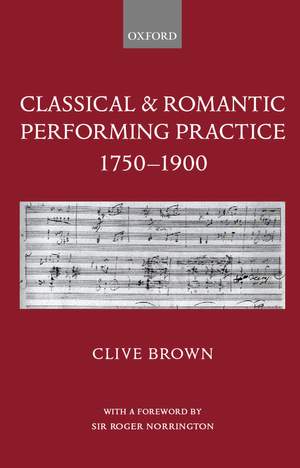 The past ten years have seen a rapidly growing interest in performing and recording Classical and Romantic music with period instruments; yet the relationship of composers' notation to performing practices during that period has received only sporadic attention from scholars, and many aspects of composers' intentions have remained uncertain. Clive Brown here identifies areas in which musical notation conveyed rather different messages to the musicians for whom it was written than it does to modern performers, and seeks to look beyond the notation to understand how composers might have expected to hear their music realized in performance. There is ample evidence to demonstrate that, in many respects, the sound worlds in which Mozart, Beethoven, Wagner, and Brahms created their music was more radically different from ours than is generally assumed. This is an essential book for all performers and students of Classical and Romantic music.

This book will revolutionise the study of music

Sparks of knowledge fly up in all directions

Audiences are in for some good times

The infinitely complex and fascinating relationship between notation and performance... assumes centre stage... Brown draws on an astonishing range of sources in his discussions of accentuation, articulation and phrasing (including string bowing), tempo and its modification, ornaments, vibrato, portamento and a host of other areas... a vast range of information for the performer's consideration while, at the same time, calling for a certain tenacity from the reader... Brown's grasp of primary sources is wide-ranging and scholarly, lavishly illustrated with musical examples, often of unfamiliar repertory. He uncovers many questions and possible answers, which can hardly fail to stimulate the thinking performer... I for one shall be underpinning future practical endeavours with constant reference to Brown's pioneering volume, a substantial achievement which will inevitably repay close and repeated study