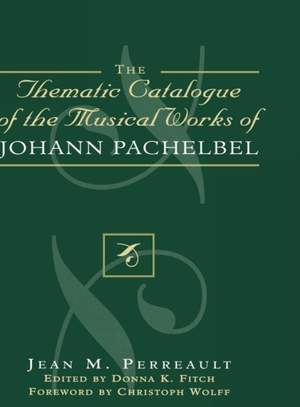 Thematic Catalogue of the Musical Works of Johann Pachelbel

This Catalogue provides scholars and performers with a survey of the breadth and variety of the repertoire of the composer whom Christoph Wolff describes as "one of the most seminal and influential musicians of the pre-Bach generation in Germany." Pachelbel composed the majority of his 527 works for keyboard instruments, as well as choral, vocal, and chamber music. The Catalogue presents incipits for each that can be identified. The list of works is intended to determine the totality of the corpus and knowledge about it, to determine the best means of identifying each work, and to settle problems of identity among similarly titled works. An essay on authorities examines the controversies of authenticity of Pachelbel manuscripts. Liberally footnoted and meticulously compiled, the Catalogue is invaluable to those familiar with Pachelbel's compositions and will create new interest.