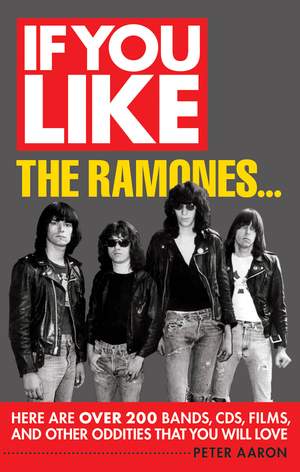 Here Are Over 200 Bands, CDs, Films, and Other Oddities That You Will Love

With that quick count-off, four hoppin' cretins from Queens who called themselves the Ramones launched the 1970s musical revolution known as punk rock. And ever since, popular music hasn't beenthe same. Perhaps the most imitated band of all time, the Ramones stripped rock 'n' roll down to its bare bones and beating heart and handed it back to the people, making it fun again and reminding everyone that, hey, they coulddo this, too.

But “da brudders” didn't just influence their key comrades in the original punk explosion. Their raw, tough sound and divine gift of enduring, melodic songcraft has power-drilled its way intomusical styles as divergent as college rock, power pop, hardcore punk, thrash metal, grunge, and the avant-garde, and continues to be felt in newer waves of young acts. And what about the music that influenced the Ramonesthemselves – early rock 'n' roll, surf rock, British Invasion sounds, garage rock, girl groups, hard rock, bubblegum, proto-punk, and glam rock? Or the nonmusical stuff that also warped the skulls beneath those trademarkbowl haircuts – weird movies, cartoons, trashy TV shows, comic books, and other cultural jetsam? It's all here, just waiting for you to discover and dig. Hey Ho, Let's Go!