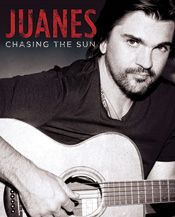 In Chasing the Sun, the international music icon and humanitarian shares the incredible story of his life and how music and faith guided his path. In his own un-adulterated words, and with visually arresting images throughout—some of them never before seen—Juanes imparts his defining moments from childhood to present day, reflecting on his spiritual and musical journey and the personal and professional experiences that shaped the man he is today. Born and raised in Colombia, Juanes developed his deep love of music from his family and learned to play guitar at an early age. By age sixteen, he became a founding member, lead guitarist, vocalist, and song-writer for Ekhymosis, which went on to become Colombia’s leading hard-rock band. However, it was his career as a solo artist that propelled him toward international superstardom. With great honesty, Juanes reveals how his times of glory were often intersected by times of doubt and soul-searching and how remaining true to his beliefs and passionate about his art gave him the strength and foresight to reinvent himself and his career. While his role as a recording artist is well documented, the very private Juanes has never opened up in his own words—until now.