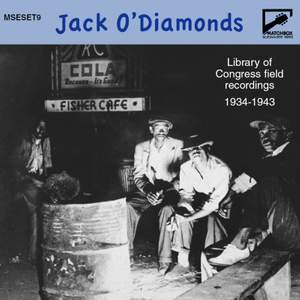 Allison Mathis: Mama You Goin' to Quit Me As Good as I Been to You

Allison Mathis: Bottle Up and Go

Rochelle French: Out in the Cold Again

Gabriel Brown: A Dream of Mine

Rochelle French: Blues (I Ain't Got No Mama Now) [Take 1]

Rochelle French: Blues (I Ain't Got No Mama Now) [Take 2]

Rochelle French: What Did the Doodle-Bug Say to the Mole?

Roger Matthews: The Fox and Hounds

Ace Johnson: Mama Don't 'Low No Swingin' Out in Here

Smith Casey: I Wouldn’t Mind Dying if Dying Was All

Roger Gill: When I Git Home

Wallace Chains: My Pore Mother Keeps On Praying for Me

Pete Harris: Is You Mad At Me?

Jack Johnson: It Was Early One Morning

Little Brother: Up and Down Buildin' the K. C. Line

Pete Harris: Standing on the Border

A. Haggerty: I Feel That Old Woman Is a Jinx to Me

Set 9 of the iconic Matchbox Bluesmaster Series. The six LPs of the Library of Congress Series were released as a joint venture between Flyright Records and Saydisc Records during the 1970s. The original recordings made between 1934 and 1943 were made in the field on portable 78rpm lacquer disc cutting machines by various collectors. In the 30 years or so that they were lodged with the Library of Congress before being transcribed for this series in the 1970s many of the fragile discs deteriorated. The music recorded on those discs is of the highest importance in the history of the development of the blues and it was vital to preserve this for posterity. Some of the performances are really outstanding and from completely unknown and previously unrecorded singers and musicians some of whom (volumes 5 & 6) were in state penitentiary farms.