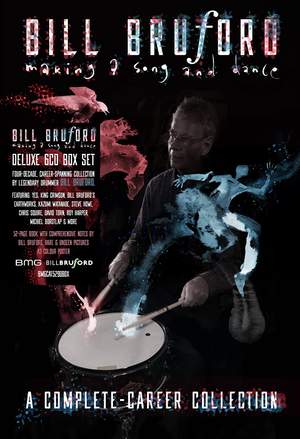 New, Making a Song and Dance: A Complete-Career Collection

Bill Bruford's career is like his drumming sound - inimitable. Known for his ringing metal snare drum, crisp cymbal work, and knack for complex time signatures, a young Bruford came to prominence in the late '60s with Yes. The drummer completed his British art rock trilogy by briefly joining Genesis in the 1970s and spending a quarter-century with King Crimson through the late '90s. In between King Crimson dates, Bruford led a dazzling self-titled jazz fusion solo band from 1978 to 1980.

This 6CD box set covers Bill’s musical journey throughout the years; CD1&2, titled ‘The Collaborator’ – is a collection of songs from Yes, King Crimson, UK & National Health displaying Bill’s formidable talent. CD3&4 titled ‘The Composing Leader’ is where Bill demonstrates his composing ability from his solo career and musical project ‘Earthworks’. The last two CDs titled, ‘Special Guest & Improvisor’ showcase Bill’s natural talent for writing and improvising with a plethora of musicians. Including, Roy Harper, Akira Inoue, Kazumi Watanabe, Steve Howe & many more. There is a detailed biography written by Bill included within the box that features rare and unseen photos. The outer box artwork, gatefold CDs and booklet have been designed by the incredible artist and graphic designer Dave McKean.