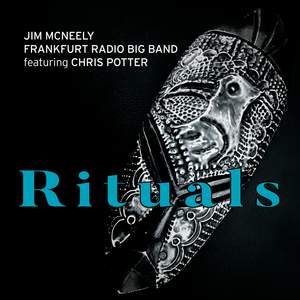 Stravinsky’s angular rhythms, dissonant voicings and sense of drama are more than trace elements, but this is an entirely original work that brilliantly plays to the strengths of both big band... — Jazzwise, March 2022, 4 out of 5 stars More…

Jim McNeely's tribute to Igor Stravinsky's 'The Rite of Spring' is immortalised on record with the help of the Frankfurt Radio Orchestra and saxophonist Chris Potter.

Igor Stravinsky’s Le Sacre du Printemps (The Rite of Spring) is regarded as one of the key pieces of 20th century classical music and after its world premiere in 1913, quickly established itself in concert hall repertoires around the globe. In 2013 renowned pianist/composer Jim McNeely was commissioned to write a tribute to the work for the Frankfurt Radio Big Band/hr Big Band, which was performed at Alte Oper Frankfurt’s Stravinsky Festival that same year.

Rituals, the resulting piece, was designed to feature Chris Potter, one of the finest saxophonists of our time and a player with a unique sonorous tone and inexhaustible inventiveness. The performance was a huge success which is why Potter and the Frankfurt Radio Big Band/hr Big Band reconvened in a studio in February 2015 to record the six-part composition. Four additional pieces from Potter’s catalogue also form part of this new Double Moon Records release, each one arranged by McNeely for the orchestral context. Dawn and Wine Dark Sea are from his album The Sirens (ECM 2013), The Wheel is from Underground (Sunnyside 2006) and Okinawa is on the live album This Will Be (Storyville 2001).

“Jim McNeely has always been one of my favourite composer/arrangers, so I was thrilled to get the chance to work with him on his piece inspired by one of my favourite compositions The Rite of Spring. He also arranged some of my music in a way that made me hear my own composition s in a fresh way. The band was a total delight to work with and played beautifully throughout, and I’m very proud of the results” - Chris Potter

Stravinsky’s angular rhythms, dissonant voicings and sense of drama are more than trace elements, but this is an entirely original work that brilliantly plays to the strengths of both big band and star guest.