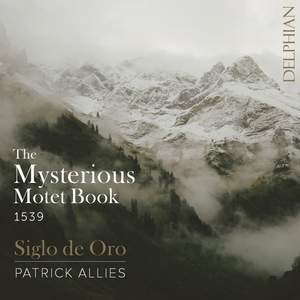 New, The Mysterious Motet Book of 1539

The big surprise here is the impressive quality of the Christmas piece Haec Dies by the otherwise unknown Joahannes Sarton and which attracts a commendably persuasive and alert interpretation... — BBC Music Magazine, November 2022, 4 out of 5 stars More…

In the late 1530s, Milanese composer Hermann Matthias Werrecore assembled a collection of sacred music and sent it across the Alps to the publisher Peter Schoeffer in Strasbourg. In making the journey from staunchly Catholic Milan to newly Protestant Strasbourg, the repertoire in question became cross-confessional. What was the purpose of publishing a motet book in a German imperial city where Latin choral singing no longer took place? Siglo de Oro have collaborated with Dr Daniel Trocmé-Latter (University of Cambridge) to showcase works from this puzzling volume, setting motets by Nicolas Gombert, Jacquet of Mantua, Jacques Arcadelt and Adrian Willaert alongside less familiar names such as Simon Ferrariensis and the enigmatic Johannes Sarton. The resulting recording exhibits the combination of meticulous musicological research and finely crafted, sonorous singing that their previous Delphian albums have led us to expect.

All tracks are premiere recordings.

“Plumbing deep wells of spiritual devotion, this music meets its match in poised, committed performances of simultaneous unanimity and character ... ” Choir and Organ

The big surprise here is the impressive quality of the Christmas piece Haec Dies by the otherwise unknown Joahannes Sarton and which attracts a commendably persuasive and alert interpretation just one of many rare insights on this disc.

Nicely blended, balance tending just a little top-heavy, Siglo de Oro bring a youthful freshness to this music – much of it unfamiliar. If they haven’t solved the musical mystery, they’ve certainly posed some curious questions.