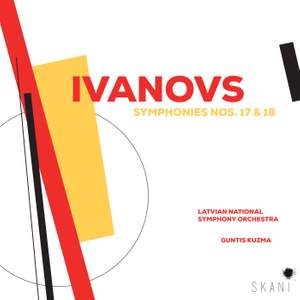 Janis Ivanovs' (19061983) Symphonies Nos. 17 & 18 continue the series by most the prominent Latvian orchestra on SKANi label. These timeless works see their world premiere release in this 2022 studio recording. Available previously only as broadcast copies and ageing LP records from the 70s and 80s, these timeless pieces by perhaps the most talented Latvian symphonic composer are now available to a wider audience.

The previous album of Janis Ivanovs' symphonic music (LMIC/SKANI 126, 2021) included his Symphonies No. 15 and 16. The CD concluded with the rich and resounding final E-flat major chord. There is a sense that the author uses this tutti chord to draw a clear boundary in his creative work. Beyond this boundary remains the central portion of his creative work opuses full of dramatic conflict (mainly composed in the 1960s), which are characterised by constant battles, conflicts, collisions, gains and losses. Now, with a final chord that expresses a complete break from his previous life, Ivanovs sees this as a generous, rich autumn, which is brightened by brilliant rays of sunlight. It is like a life that has been bitter, but not in vain. Pride and satisfaction with this life. The apotheosis of a life.