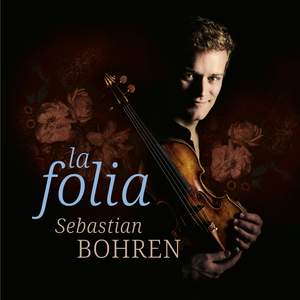 Bohren clearly revels in the violin’s ability to seamlessly spin long melodic lines, but this tonal repertoire necessitates a greater awareness of the delicious interplay of dissonance and consonance. — BBC Music Magazine, October 2022, 4 out of 5 stars More…

Kreisler: Praeludium and Allegro (in the style of Pugnani)

Respighi: Pastorale in A

I. Andante (arr. for violin and strings by Ingolf Turban and Holger Frey; cadenza: F. Kreisler)

Kreisler: Variations on a Theme by Corelli (in the style of Tartini)

Sebastian Bohren's new album La folia is an affectionate homage to Ida Haendel, one of his heroes; to fiddlers of the late 19th and early 20th centuries; and to the violin itself.

The Swiss violinist says, "It is also like a hall of mirrors, as some tracks invoke the spirits of two or three violinists." From an early age, Sebastian was immersed in a lineage of violinists who favoured Romantic transcriptions of Baroque repertoire, studying with a pupil of the great Ukrainian-born violinist Nathan Milstein. Later in life, he fell under the influence of violinist Ida Haendel on YouTube, watching her perform Corelli's La folia variations. "She played this amazing virtuoso cadenza, and I was captivated." So arose the concept of a programme reflecting the ethos of La folia, the ear-catching theme which has fascinated composers for centuries, from the Baroque era's Tomaso Antonio Vitali and Giuseppe Tartini to latter-day Ottorino Respighi and Fritz Kreisler. Sebastian captures the sound world with sincerity, playing on two different violins, the 1710 "King George" Stradivarius, and a Guadagnini made in 1761.

SEBASTIOAN BOHREN - BIOGRAPHY The Suddeutsche Zeitung has described Sebastian Bohren as 'one of the most serious-minded, forthright musicians of his generation'. He regularly makes concerto appearances with orchestras such as the the Royal Liverpool Philharmonic Orchestra, NDR Radiophilharmonie, Sinfonieorchester Basel, Luzerner Sinfonieorchester, Orchestra della Svizzera italiana, Munchener Kammerorchester, Deutsche Staatsphilharmonie Rheinland-Pfalz and Stuttgarter Philharmoniker. Conductors with whom he has collaborated include James Gaffigan, Heinz Holliger, Andrew Litton, Andrew Manze, Christoph Poppen and Mario Venzago. Sebastian Bohren was born in 1987 and trained with Jens Lohmann, Robert Zimansky and Zakhar Bron in Zurich, before studying with Igor Karsko in Lucerne and Ingolf Turban at the University of Music and Performing Arts Munich. Other mentors include Ana Chumachenco, Hansheinz Schneeberger, Dmitry Sitkovetsky and Christian Tetzlaff. He plays a 1761 violin made in Parma by Giovanni Battista Guadagnini, the 'Ex-Wanamaker-Hart'.

STRINGENDO - BIOGRAPHY Stringendo has existed since 1999 and can look back on a string of successes, including prizes in numerous competitions and countless concerts that the group has given throughout much of Europe. It was founded by Jens Lohmann as a focus of creativity for young and exceptionally talented prizewinners to meet and make music together. Today, its members, who range in age from ten to 25, work regularly under Jens Lohmann's direction in two ensembles, Generationen 14 and 4Kids. Among the recurring formats in which they appear are the Stuttgart Christmas Concerts and the New Year Concerts in Zurich's Wasserkirche, but each year their focus is also the Herbst in der Helferei Festival, where they are joined by international celebrities such as the violinists Roby Lakatos, Sebastian Bohren, Patricia Kopatchinskaja, the conductors Howard Griffiths and Mario Venzago, the cellist Mischa Maisky and the oboist Albrecht Mayer. Stringendo implies a sense of new departures and of movement: the dynamism and energy of this group of young musicians are a guarantee of enthusiasm and inspiration .

""bags of character ...a listening experience that commands the attention from start to finish" Gramophone

"refreshingly rich in colour and nuance" The Guardian

"a model of balance and clarity" The Strad

Bohren clearly revels in the violin’s ability to seamlessly spin long melodic lines, but this tonal repertoire necessitates a greater awareness of the delicious interplay of dissonance and consonance.