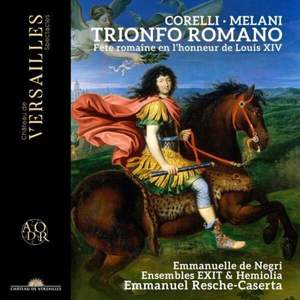 The most impressive public celebration in baroque Rome was given in honour of Louis XIV in 1686. To celebrate the undisputed protector of the Catholic Church, and one year later the successful operation on the anal fistula of the Great King, the French Ambassador organised a grandiose open-air event on the Pincian hill, between the Trinità dei Monti and the Piazza di Spagna. Corelli's prestigious orchestra in full formation performed "Sinfonie" with trumpets and timpani, accompanied by fireworks. The virtuoso violinist Emmanuel Resche-Caserta reconstructs this extraordinary musical feat, restoring the cantata in honour of the King of France composed by Alessandro Melani. Here is a revival of the Roman baroque splendour that so marked the French court!