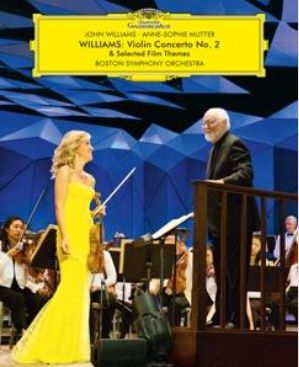 It’s a hugely expressive, deeply atmospheric four-movement work and, like all his concertos, quite far removed from the thematic narrative music we’re all so familiar with. That’s not to say... — BBC Music Magazine, September 2022, 5 out of 5 stars More…

Williams, John: Han Solo and the Princess (from Star Wars Episode V: The Empire Strikes Back)

Williams, John: Marion's Theme (from Raiders of the Lost Ark) 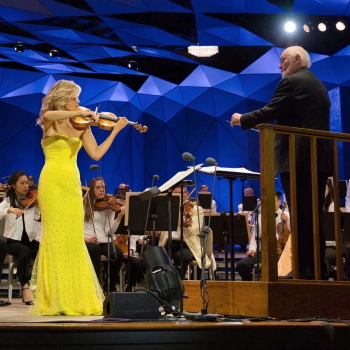 John Williams continues his collaboration with violinist Anne-Sophie Mutter, joining forces with the Boston Symphony Orchestra for the world premiere recording of his Violin Concerto No. 2.

Following the huge success of John Williams – The Berlin Concert, which topped the German pop charts earlier this year, Deutsche Grammophon is now proud to present the world-premiere recording of John Williams’s Violin Concerto no.2. The work was written for and recorded by the venerated composer’s friend and frequent collaborator Anne-Sophie Mutter. Her impassioned performance was given with the Boston Symphony Orchestra, conducted by Williams, who celebrated his 90th birthday on 8 February 2022.

The new album also includes three film themes newly arranged for the violinist by their composer – the Theme from The Long Goodbye, “Han Solo and the Princess” from Star Wars: The Empire Strikes Back, and “Marion’s Theme” from Indiana Jones and the Raiders of the Lost Ark.

Williams and Mutter have worked together often since she gave the first performance of his Markings in Boston almost five years ago, and have co-starred on two previous hugely successful Deutsche Grammophon albums: Across the Stars (2019) and John Williams in Vienna (2020). Williams’ second violin concerto reflects his deep admiration for the lyrical warmth and dynamism of Mutter’s playing and for her sense of musical adventure.

John Williams recalls: “When Anne-Sophie invited me to compose a concerto for her, I thought it was a wonderful opportunity to write for one of the world’s greatest artists. It was also a challenge, of course, because there are so many great violin concertos in the repertoire.”

Full of stylistic contrast, Williams’s Violin Concerto no.2 begins with the rhapsodic “Prologue”. This is followed by the atmospheric, Debussyesque “Rounds”, and then by the tense, jazzy “Dactyls”, which includes a brief cadenza for violin, harp and timpani. Violin and harp duet again in the “Epilogue”, which concludes the work with what the composer describes as “a gentle resolution in A major that might suggest both healing and renewal”.

“I knew from the recording we made together for DG of my theme from Cinderella Liberty of her remarkable feeling for jazz,” Williams adds. “So I wrote a quasi-improvisation for solo violin at the start of the concerto’s ‘Prologue’ and she was completely at home with it. I can only think of this piece as being about Anne-Sophie. This is a truly personal album for me, because of the rapport I have with her and because of my long relationship with the wonderful musicians of the Boston Symphony.”

“The idea for the piece formed when we worked together on Markings,” says Mutter. “I had no idea then that it would grow into such a gigantic composition, so rich in material and with such enormous emotional and expressive scope. I’ve always loved jazz, so it was a particular joy to discover that the violin’s first entry has the freedom of jazz. It’s the ‘stem cell’ of the whole piece, a terrific starting point for such a complex work. I was overwhelmed by the piece and its technical difficulties at first. But it became a very dear friend as I worked on it every day during lockdown. It was precious to have time to explore this incredible music in depth and feel part of the creative process, to speak to John as he composed and revised the score and discover just how much he loves violin.”

Mutter and Williams gave the world premiere of the concerto on 24 July 2021 at the Boston Symphony Orchestra’s summer home in Tanglewood. “Mutter carried the solo like an old friend, shaping each phrase with intention and panache,” observed the Boston Globe. The musicians all reconvened in the autumn to record the concerto and the three film themes at Boston’s Symphony Hall.

“I can only think of this piece as being about Anne-Sophie. I took my inspiration and energy directly from this great artist herself.” – John Williams

“It has been a lifelong dream of mine to have John Williams compose a concerto for me.” – Anne-Sophie Mutter

It’s a hugely expressive, deeply atmospheric four-movement work and, like all his concertos, quite far removed from the thematic narrative music we’re all so familiar with. That’s not to say Williams doesn’t paint a vivid picture, and there’s plenty of orchestral drama.

The concerto emerges from a cosmic murmur leading to an improvisatory violin solo and fades away, 35 minutes later, in a haunting violin threnody that suggests healing and renewal...Soaringly impassioned, [the theme from The Long Goodbye] might make that a fine concerto movement on its own.

It constantly teems with new material, none of which outstays its welcome, merely revealing more of its secrets each time. No small amount of credit must also go to Mutter, who unfailingly holds the listener to attention and is in complete command of what she has described as some unbelievably technically challenging passages. Knowing her so intimately as a performer has clearly been a source of inspiration for Williams, whose writing is tailor-made to her abilities.

We are a world away from the blowsy bluster of his imperious film scores: there is an astringency and embrace of dissonance here, and Mutter audibly relishes Williams’s gift.