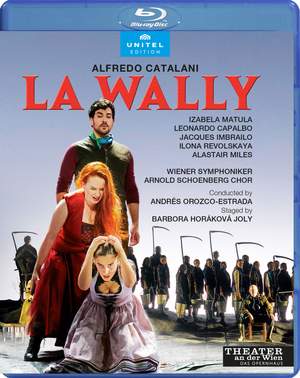 Catalanis masterpiece, first performed in 1892 at La Scala in Milan, is best known for its aria Ebben? Ne andr lontana. With nuanced harmonies and colourful instrumentation, he pays great attention to the orchestra sound. He chose highly unusual material for his opera: the successful novel Die Geier-Wally by Wilhelmine von Hillern tells the story of a young woman who does not fit any of the gender clichs of the time. Unlike many earlier operatic heroines commanded to marry against their will, Wally does not look for a solution in society, but instead runs away to the mountains. Her husband must be her equal, someone unafraid to face both a bear and her father. Izabela Matula - A Wagnerian hell of a woman with a great soprano. (Kronenzeitung) // Catalanis highly dramatic music finds an intense advocate in Andrs Orozco-Estrada on the podium of the excellently disposed Wiener Symphoniker. (Wiener Zeitung)