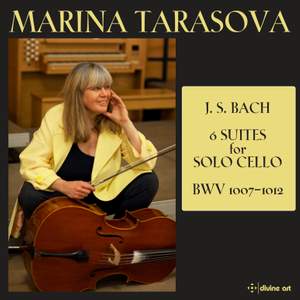 This is not a recording for the faint-hearted. Anyone expecting soothing, bubble-bath arpeggiations from the Prelude of the First Suite is in for a shock. Marina Tarasova’s performance is gritty,... — Gramophone Magazine, August 2022 More…

The Six Suites for Solo Cello by J S Bach composed around 1720, are generally regarded as the first and greatest masterpieces ever written for the instrument.Their scope is vast and ingenious. Although most of the time, only one note is played, occasional chords and masterful melodies imply harmony and counterpoint.The Suites have been performed and recorded countless times over the last 100 years, with a variety of interpretative approaches. These approaches, until recently, could often be rather academic and formal, as it used to be thought that baroque music was mostly about form. The present cellist takes a radically opposing approach, one which is inspirational and which infuses the works with vitality and spirit.Marina Tarasova is a world-renowned cellist with many recordings to her name for Musical Concepts and Northern Flowers among other labels, and this is her first recording for Divine Art. She has won international competitions in Prague, Florence and Paris and has a wide repertoire covering works of composers from the 17th century to the 20th century.

This is not a recording for the faint-hearted. Anyone expecting soothing, bubble-bath arpeggiations from the Prelude of the First Suite is in for a shock. Marina Tarasova’s performance is gritty, windswept and growlingly confident.