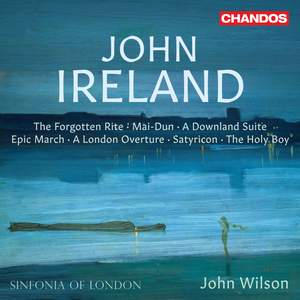 John Ireland was something of a child prodigy, entering the Royal College of Music at the age of fourteen. There he studied piano, organ and composition (under Charles Villiers Stanford). He quickly progressed to significant positions as an organist, whilst continuing to pursue his interests as a composer. The Forgotten Rite, from 1913, is one of his earliest orchestral compositions, and was premired by Sir Henry Wood at the Queens Hall. The symphonic rhapsody Mai-Dun was inspired by the Dorset countryside Thomas Hardy Country a landscape that exerted a lifelong influence on Ireland. While it was commissioned for the national Brass Band Championships in 1932, Ireland later arranged the central two movements of A Downland Suite for strings. The first and last movements were later arranged by his pupil Geoffrey Bush. The overture Satyricon was one of Irelands final large-scale works, and is based upon texts by the Roman writer Gaius (or, in some sources, Titus) Petronius Arbiter, a courtier of Nero. A London Overture and the Epic March were both commissioned by the BBC the latter as a morale-booster during World War II. It was during this period that Ireland orchestrated The Holy Boy a piano piece composed on Christmas Day in 1913. John Wilson and Sinfonia of London present these works with care and conviction, revealing the great quality of this unjustly neglected composer.

Wilson’s interpretations remain just as glowingly understanding as before…Even if you already possess Wilson’s earlier Hallé anthology, this is an album not to be missed.

This isn't Wilson's first rodeo with Ireland on disc: he recorded a near-identical programme with the Hallé back in 2009, but even if you own and love that earlier set this new volume is well worth hearing - not least for the arrangement of A Downland Suite, which showcases the Sinfonia of London's distinctive lush string-sound to perfection. The cinematic qualities of Mai-Dun are even more thrillingly captured here than on the previous recording, and the gorgeous orchestration of The Holy Boy is a little gem.

Good tunes abound in A Downland Suite, while the bustle of A London Overture and Satyricon is very fetching. But the heart of this collection lies in Ireland’s sensitive responses to natural landscapes, their histories and inner spirit...It’s all lovely music, superbly played with plenty of poetry and fire. Memo to John Wilson: continue doing just what you’re doing.

There are some wonderful things here... Wilson’s players give the “Prelude” just enough bite, and the “Elegy” plumbs incredible depths in four and a half minutes... The opening is as sinister as it is witty, and there’s an exquisite horn solo eight minutes in.