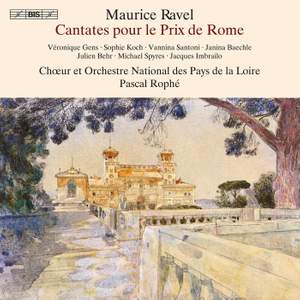 there is much to enjoy in this fascinating set which offers sensitive and refined orchestral playing, as well as especially outstanding vocal contributions from Véronique Gens and Michael Spyres. — BBC Music Magazine, September 2022, 4 out of 5 stars More…

I. Me voici seul enfin !

Between 1803 and 1968, the Grand Prix de Rome marked the zenith of composition studies at the Paris Conservatoire. In Maurice Ravels time the competition included an elimination round (a fugue and a choral piece) followed by a cantata in the form of an operatic scena. The entries were judged by a jury which generally favoured expertise and conformity more than originality and Ravels growing reputation as a member of the avant-garde was therefore hardly to his advantage, and may explain why he never won the coveted Premier Grand Prix, and the three-year stay at Romes Villa Medici that went with it.The present two-disc set brings together all the vocal works that Ravel composed for the Prix de Rome five shorter settings for choir and orchestra and three cantatas, each with three characters taking part in a plot which followed a more or less fixed sequence of introduction, recitative and aria, a duet, a trio and a brief conclusion. First published more than half a century after Ravels death, these test pieces for the Prix de Rome have never acquired the popularity of his other early works, such as Pavane pour une infante dfunte, Jeux deau or the String Quartet. They are worth more than their reputation as academic exercises might suggest, however, and deserve to be better known, especially when performed by Orchestre National des Pays de la Loire and Pascal Roph and a team of vocal soloists including Vronique Gens and Michael Spyres.

there is much to enjoy in this fascinating set which offers sensitive and refined orchestral playing, as well as especially outstanding vocal contributions from Véronique Gens and Michael Spyres.

Each of the three cantatas achieves a formal succinctness, as you would expect of Ravel, and while the storylines may be “by the numbers” his music never is. It does not hang fire, every note matters, and when there is an opportunity for lyrical outpouring, particularly in Alcyone, Ravel makes the most of it.

What a delicious surprise this has turned out to be...what is beyond doubt in the three cantatas and handful of elaborated choruses presented here is his supremely affecting way with the voice above and beyond his already considerable orchestral skills.

Given the stylistic and harmonic complexity of the three main cantatas here (Alyssa, Alcyone and Myrrha), it's easy to see why the panel at the Paris Conservatoire were rather flummoxed by the young Ravel's vaulting ambition when he unsuccessfully submitted them for their prestigious composition-competition. It's fascinating to hear the foreshadowings of later works like Shéhérazade and occasional echoes of Wagner (specifically Tristan) in these scores, and all seven well-contrasted soloists sound fully invested in text and drama throughout.