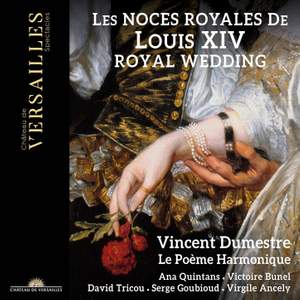 The wedding of Louis XIV with the Infanta of Spain, on 9 June 1660, was an exceptional event, sealing the peace between two monarchies that had been opposed for centuries. The 21-year-old King set off on a journey lasting thirteen months to cross and discover his kingdom: 15,000 people and 8,000 horses, 3,200 km in 95 stages, culminating in a wedding in Saint-Jean-de-Luz! The greatest festivities took place during the wedding ceremony, then on the journey of their Majesties, for their solemn entry into Paris and finally for the opera given in the Louvre in honour of the bride and groom! The finest composers contributed to the celebrations: the King’s trumpets opened the concert, while the church galleries hosted Du Mont’s symphony, organ and motets; finally, the most beautiful excerpts from Cavalli’s Xerxes and Lully’s accompanying ballets celebrated the Royal Wedding of Louis XIV through opera. Vincent Dumestre brings to life the musical splendours of the wedding of the century!