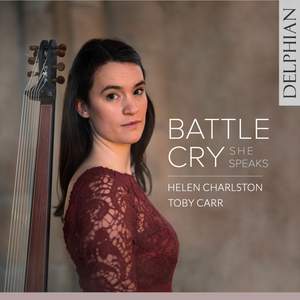 Purcell: O lead me to some peaceful gloom (from Bonduca or The British Heroine, Z574)

When I am laid in earth (Dido's Lament)

II. Philomela in the forest

III. A singer’s ode to Sappho

Purcell: An Evening Hymn 'Now that the sun hath veiled his light', Z193

The grave beauty of Charlston's inky mezzo is a joy in itself, and the fierce directness of her delivery makes a formidable impact in this programme of laments by Eccles, Purcell, Strozzi et al, with a terrific new commission by Owain Park (which feels perfectly integrated into the framework of the recital) also making its mark; Carr, always completely attuned to his singer's imagination, conjures some magical colours from his theorbo throughout.

Carr’s theorbo playing is sensuous and vivid, and works especially well in the sonic explorations of the four songs by Park. Charlston’s distinctive, expressive lower register, and the clarity of every word, contribute to an outstanding disc.