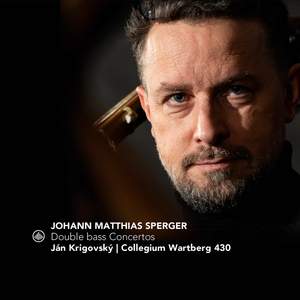 The three concertos featured here and written between 1778 and 1779 exhibit a great deal of melodic charm, character and good humour, if not perhaps the greatest originality...Krigovský dazzles... — BBC Music Magazine, August 2022, 4 out of 5 stars (Performance) / 5 out of 5 stars (Recording) More…

The first recording of three double-bass concertos by Johann Matthias Sperger (1750-1812), performed by soloist Jan Krigovsky with the Collegium Wartberg 430.

Johann Sperger was a double-bass virtuoso who created the first examples of concertos where his instrument is fully used also in its cantabile potential. The performance is entrusted to a specialist and scholar, Jan Krigovsky, and to his period instrument ensemble, Collegium Wartberg 430. To fully accomplish the period reconstruction, the recording took place in the same hall of the same palace in Bratislava where Sperger played them for the first time.

The first question to ask must be: how could it possibly come about that certain essential works by a composer which display no flaw or failure in musical conception or compositional execution stayed dormant in libraries for well over two hundred years and had to wait so long for publication and audience attention? Three concertos for double bass and orchestra by Johann Matthias Sperger, who was not just a composer but also the most renowned double bassist of the 18th century, performed and recorded here by orchestra and soloist according to their original scores. The decision was taken here to select, from Sperger's vast legacy of compositions which includes no less than eighteen double bass concertos just those early works called No. 2, No. 3 and No. 4.

These works are all products of the years of Sperger's first employment as a double bassist, between 1777 and 1783, in the court orchestra of the archbishop of Hungary, the duke Joseph Graf von Batthyany in Pressburg. They date specifically from the years 1778 and 1779. Sperger's treatment of the solo double bass in a way quite new in his day as well as the execution of the orchestral part recall the Cello Concertos of no less a figure than Joseph Haydn. Already just the tonal range demanded here, spanning four and a half octaves, shatters all previous conceptions and lets the double bass enter those cantabile spheres once peculiar to the cello or violin. Melody and virtuosity leave nothing to be desired and demand of the soloist true mastery of his instrument.

All three double bass concertos on this CD are three-movement concertos. In all of them the first and third movements are spirited, each with its respectively striking theme, and virtuosically constructed, the outer movements in all cases employing wind instruments: 2 oboes and 2 horns, and in Concerto No. 3 also kettledrums and trumpets. The great soloist's idea of enriching the orchestral colours of Concerto No. 4 with a dulcimer must be seen to be born out of the partly folkloric quality of this music. Sperger has the slow second movements accompanied by strings alone, so as to allow the solo double bass room to develop its melodies. These movements emanate a sense of placid contemplation, forming a counterpoint to the forward-pressing vigour of the outer movements.

The soloist uses gut strings, as was common practice at the time of the works' composition well over two hundred years ago, bringing out the warm sound of the instruments. Used in this recording were: for Concerto No. 2 an Anton Posch double bass (1736, Vienna); for Concerto No. 3 one by Johann Jacobus Ertl (1789, Pressburg) and for Concerto No. 4 one of an unnamed manufacturer (ca. 1810, Vienna). The chamber orchestra Collegium Wartberg 430, led by the soloist Jan Krigovsky, provides highly authentic accompaniment. To do justice to history and for the pleasure of today's audience the present recordings were made in the same auditorium as Johann Matthias Sperger first presented these concertos in: the "Hall of Mirrors" in the Primate's Palace of Bratislava (formerly Pressburg).

The three concertos featured here and written between 1778 and 1779 exhibit a great deal of melodic charm, character and good humour, if not perhaps the greatest originality...Krigovský dazzles the listener with brilliant passage work and witty cadenzas, and the orchestral accompaniments for each concerto are remarkably varied.