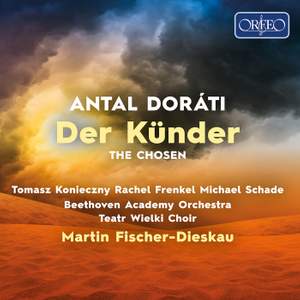 Dorati was no Handel, as he would have readily admitted. For its individual synthesis of 20th-century styles, and abruptly uncovered moments of beauty, the piece is nevertheless well worth investigation. — Gramophone Magazine, August 2022 More…

Antal Doráti is well known as a conductor within interested audience sectors, not least through the unparalleled range of his recording catalogue. But moreover, the Hungarian-born American has also left behind a compositional oeuvre of not insignificant proportions.

The Chosen – as the work was named in English by Doráti – is his only stage work and is based on the mystery play Elija by distinguished philosopher Martin Buber (1878-1965). It was his mentor Doráti himself who drew the attention of Martin Fischer-Dieskau, initiator of this world premiere recording in Cracow and internationally acclaimed conductor and scholar, to this Opus Magnum.

Dorati was no Handel, as he would have readily admitted. For its individual synthesis of 20th-century styles, and abruptly uncovered moments of beauty, the piece is nevertheless well worth investigation.

In the leading role of Elijah, Tomasz Konieczny dominates the action nearly throughout; and he is a tower of strength, firm of voice and pitch in music that must be extremely difficult to encompass with accuracy... an exceptionally good presentation of an exceptionally interesting opera.

We have Martin Fischer-Dieskau to thank for bringing us its premiere recording (he assisted Dorati at the Detroit Symphony Orchestra in the late 1970s). It shows that Dorati was a composer to be reckoned with, and that Der Künder has not merited its obscurity...Elijah is sung by Tomasz Konieczny, whose mellifluous, rock-steady bass-baritone is ideal for the part.