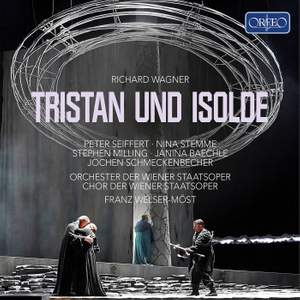 This new/old set is of absorbing interest for the conductor’s work with the score and the special strengths of his Isolde. — Gramophone Magazine, September 2022

Richard Wagner’s key work of musical romanticism live from Vienna State Opera. Although the premiere in 1865 was not to be at Vienna State Opera but at Munich’s court theatre (June 10th), Wagner’s Tristan and Isolde was performed more than 400 times at the House on the Ring since its premier in 1883.

This live recording from June 2013 under the baton of Franz Welser-Möst presents Nina Stemme as Isolde – her debut in that role at Vienna State Opera –, Peter Seiffert as Tristan (who was honoured Kammersänger of the Vienna State Opera the same month the recording was made), Jochen Schmeckenbecher as Kurwenal, Stephen Milling as König Marke and Janina Baechle as Brangäne. The 3 CD set was first released in 2019 in the sold out 150 Years Wiener Staastoper – The Anniversary Edition (C980120).

This new/old set is of absorbing interest for the conductor’s work with the score and the special strengths of his Isolde.