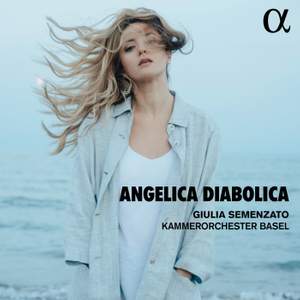 Giulia Semenzato, already renowned for her interpretations of the Baroque repertory and her Mozartian roles, presents here her first solo album. The programme, entitled Angelica diabolica, is devoted to the female protagonists of Ludovico Ariosto, author of the epic poem Orlando furioso, whose emblematic figure is Angelica, a revolutionary heroine, ready to resort to any trick in order to regain her freedom. After the Baroque Rome of Luigi Rossi and his opera Il palazzo incantato (1642), we turn to the galant style of Naples with Nicola Porpora’s serenata Angelica (1720), then to Milan in 1702 with the warlike heroine of Bernardo Sabadini’s opera Angelica nel Catai, before a more melancholy take on the character by Agostino Steffani (1691). These rare numbers rub shoulders with more familiar arias by George Frideric Handel, sung by the heroines of his operas Orlando, Ariodante, Amadigi di Gaula, not to mention the famous enchantress Alcina. Alongside the Kammerorchester Basel, Giulia Semenzato deploys all her virtuosity, vocal agility and feeling for words to slip into the shoes of these women, by turns angelic and diabolical.