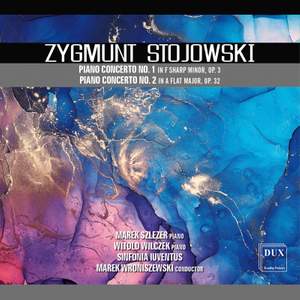 [Concerto No. 1] a sparkling piece in the Saint-Saëns manner, full of verve, original moments of melody and an orchestration willing to dazzle with cymbals. The performances are quite wonderful. — Fanfare, July/August 2022 More…

Stojowski: Piano Concerto No. 2 in A flat major (Prologue, Scherzo and Variations) Op. 32

On the album we present two piano concertos by Polish composer Zygmunt Stojowski. This music, once extremely popular, has almost never been performed and recorded after the composer's death; therefore, the aim of this CD is to familiarize the audience with the output of this extraordinary artist.

Zygmunt Stojowski (18701946) was born to a musical family; he also had the opportunity to study in Cracow under Ignacy Paderewski and in Paris under Camille Saint-Sans. After emigrating to the USA, the artist focused on performing and teaching as well as promoting Polish music abroad. His works include chamber music and symphonic compositions, among which piano pieces play an important role.

The Piano Concerto No. 1 in F-sharp Minor, Op. 3 was first performed in 1891 in Paris. This work fits perfectly into the trend of the Romantic era, although it is also characterized by the discipline proper to the Classical form. The melodious phrases and rich sonic architecture, balanced by the elegant structure of the composition, are particularly noteworthy.

The character of the Piano Concerto No. 2 in A-flat Major, Op. 32 composed in 1913 is different; the demands of the form gave way to greater emotionality, which found its outlet in a more relaxed structure of the work, similar to a symphonic poem. Both compositions are characterized by the sound matter being subtly developed into a cheerful and harmonious musical narrative.

We will hear the Concertos performed by the Jerzy Semkow Polish Sinfonia Iuventus Orchestra led by Marek Wroniszewski, accompanied by conductor Zofia Guz. The piano part will be performed by extremely talented young Polish pianists Marek Szlezer and Witold Wilczek.

[Concerto No. 1] a sparkling piece in the Saint-Saëns manner, full of verve, original moments of melody and an orchestration willing to dazzle with cymbals. The performances are quite wonderful.