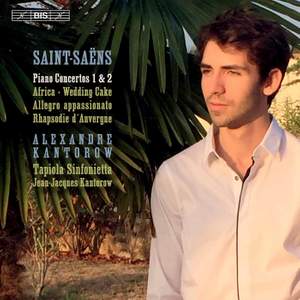 The virtuosity is breathtaking, yet nothing is hard-pressed, for the younger Kantorow has that hallmark of the greatest performers of always appearing to have plenty of time...In short, this... — BBC Music Magazine, July 2022, 5 out of 5 stars More…

"In 2019, Alexandre and Jean-Jacques Kantorow’s recording of the last three piano concertos by Camille Saint-Saëns earned the highest praise around the world, including a Diapason d’or de l’année, Editor’s Choice in Gramophone and top marks and recommendations from the leading German web sites Klassik Heute and Klassik.com. The Kantorows’ orchestra of choice was the Finnish ensemble Tapiola Sinfonietta, and they have now returned to Helsinki to record not only Saint-Saëns’ first two concertos, but all of the remaining works for piano and orchestra. Presented on this amply filled disc, the programme spans 33 years, the earliest work being Concerto No. 1, regarded as the first significant French piano concerto and written by a 23-year old composer. Ten years later, in 1868, Saint-Saëns composed the Concerto in G minor, a work which at first met with consternation although Liszt – who was present at the first performance –thoroughly approved of it. The work, which begins with the soloist playing what resembles the improvisations of an organist, soon became popular however, and remains one of Saint-Saëns’ best-known works. The shorter pieces which make up the rest of the programme were written between 1884 and 1891, and could be said to erveal different aspects of the composer: Wedding Cake was written as a wedding present to a close friend, in Rhapsodie d’Auvergne Saint-Saeëns explored French folk music, while Africa is a piece of pure Orientalism, reflecting his lasting affection for North Africa."

The virtuosity is breathtaking, yet nothing is hard-pressed, for the younger Kantorow has that hallmark of the greatest performers of always appearing to have plenty of time...In short, this disc completes a Saint-Saëns piano concerto set that has few peers and none that are better.

he always gives the more serious side of his French countryman its due, with sobriety, grandeur, and a tiger’s strength taking their place beside kittenish games and delicate charm. The lively orchestra is the Tapiola Sinfonietta, conducted by Jean-Jacques Kantorow, the soloist’s proud father.

this follow-up [to Kantorow's first Saint-Saëns recording] is just as good, with lean, lively orchestral playing from the chamber-sized Tapiola Sinfonietta... The evocative sequence of horn calls which opens Concerto No. 1 is wonderfully done, Kantorow’s energy in the “Allegro assai” totally convincing... It’s great fun.

Elegance, intelligence, esprit: this recording is the capstone of the young French Tchaikovsky prizewinner Alexandre Kantorow’s complete recording of the piano concertos and concert pieces by Camille Saint-Saëns, and it is impressive.