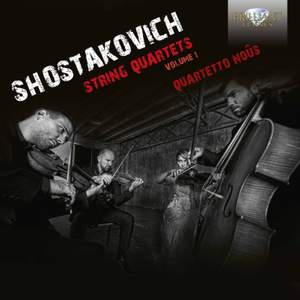 Shostakovich: String Quartet No. 5 in B flat major, Op. 92

Dimitri Shostakovich (1906-1975) is without doubt one of the most famous and influential composers of 20th century Russia. He lived in a time of Soviet repression and, though outwardly a loyal communist, he resented the restrictions imposed by the regime on his creativity. This led to a fascinating duality between conformism and the expression of his most innermost feelings, fears and anger.

Shostakovich’s 15 String Quartets form an impressive body which follows the development of his style throughout his life. They are the testimony of a tortured soul struggling to remain true to himself, expressed in anguish and bleakness, but also in serenity and bliss.

This first instalment of the recording of the complete string quartets contains the numbers 3, 5, 7, 8 and 9.

Quartetto Noûs, formed in 2011, has established itself in a short time as one of the most interesting chamber music ensembles of its generation. Its immersive performances are the result of a professional training where the Italian tradition and the most influential European schools are combined. The quartet studied with the Quartetto di Cremona at the Accademia Walter Stauffer in Cremona, at the Basel Musik Akademie with Rainer Schmidt (Hagen Quartet), at the Escuela Superior de Música ‘Reina Sofía’ in Madrid and at the Accademia Musicale Chigiana in Siena with Günter Pichler (Alban Berg Quartet) and at the Lübeck Musikhochschule with Heime Müller (Artemis Quartet). In 2015 the quartet was awarded the Piero Farulli Prize, given to the best emerging chamber music group in the current year, as part of the XXXIV Franco Abbiati Award, the most prestigious Italian music critics award. It received from La Fenice Theatre, Venice, the Arthur Rubinstein – Una Vita nella Musica 2015 Award.